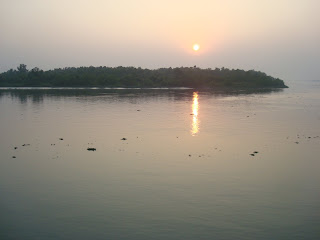 
Posted by RealTimeBangladesh at 10:59 AM No comments:

Have you heard of online job? You work for none- but work as a freelance and bid for short term jobs online. Work comes coming!

The idea has been spearheaded by a company called ODesk from Menlo Park, Calif. which has seen its own business double each year since 2004. It hosts some 100,000 employers who post jobs they want done and about half a million freelancers around the world who bid on the work.

What kind of job these are? The online jobs have wide interesting ranges. It includes data entry, computer programming, animation design, translating to accounting. But there are fun ones too. One of the hottest demand is for blog writers. There is also need for email readers. Have a nice voice- put your voice to bid!

In February, oDesk freelancers worked 630,600 hours and earned $7.1 million. Its a small part of outsourced job but do represent a rapidly growing trend- perhaps a model for future service model.

In this little future- a surprise spot is for none but Bangladesh in a recent report published by oDesk. Dhaka ranked 4th among the cities from where the free-lancers are participating. As a country, Bangladesh ranked 7th- ahead of China! Guess- who is at #1 spot? Of course India.

According to ODesk there are about 2400 individuals participating from Bangladesh, who are earning an average hourly rate of $11.59. Not bad a 1000 Taka / hour. The Average quality feedback of Bangladeshi workers also ranked a tiny bit higher than our mighty big neighbor's (4.01 vs. 3.99).

Who is generating the jobs? Few surprise again:  Ukraine and Pakistan generated more online work than Canada or China.

Want to see upbeat talking heads, ministers and committee head in Bangladesh- The huge potential of Out Source? Well two caution notes for them:

The nature of the online job auction is that it bypasses the weaknesses of our IT pondits and futile government efforts/projects, and even the taxmen. The smart online workers themselves are getting the job done.

So, how is the state of our software industry?

The situation is murky. Even BASIS- the venerable association of software companies in Bangladesh only provides some informal writeup here to the world!- read here- unprofessional and the data is difficult to rely upon! A better report is this one but- unfortunately is 5 years old.

Why this poor shape? In fact, the cause can be traced back in late 80's when the first Computer Science Program was started in BUET in 1987. We did not have any teacher in Software Engineering (SE)! We had excellent teachers in Algorithm, in Digital Logic Design- but  simply none in  SE. Like many other areas nobody in BUET could realize the potential! To many IT gurus/leaders/planners (at that time and even now) programming and software engineering seems almost same! The country is still suffering from this birth defect after all these 22 years!

On the other hand you can see the excellent result in algorithms. Bangladeshi undergraduates- started doing excellent in programming contests. The problem is programming and software engineering are never never the same. Its like trying to be competitive with a modern Garment industry setup with few thousand singer sewing machines your mom was using.

(Wondering, what about VLSI/IC design? BUET kicked out the professor in  four years after he received the best researcher award there, and successfully nipped any potential in that line too!)

The problem of programming/SE mix up still continues. To fix the situation- Bangladesh have to start good SE programs and recruit proper expert teachers. There is no substitute for  knowledge!

Software jobs- and online jobs in general, can be illusive! Just because outsource arrived in India and Pakistan does not mean they will automatically come to Bangladesh.  For the very same reason they are coming to India- will take them away to Mexico, Thailand, Peru, Nigeria or Vietnam  bypassing us who are illprepared. In online world there is no physical problem to move a job from one country to another and bypassing other.


Digital Bangladesh: A Wish and a Dream?

A little sardarji once asked his father- how you got me? The father sadrarji was embarassed and told:


Hey boy- I sleep with your mother every night and pray to God. Thats it. After 10 months you come as a gift from God! But don't ask this question any more."

The little Sardarji never asked the question ever. He become grown up and married. But did not have a child even after trying for 10 months. So the sardarji and the wife both went to a doctor. Dr. asked them all the questions- how long they are married- Are they are sleeping together? Is he smoking drugs? What do they eat and drink? Nothing wrong can be found. Then the doctor did all the medical tests hoping to find something. But, nothing wrong could be found either. The doctor was really puzzled. So finally started asking deeper question:

The state of Bangladesh IT industry seems similar. Just sleeping together and waiting has not produced the baby in all these years- and is not likely to produce either. One need to know the real trick and do the prick-  what you call 'kam'! Just dreaming is not enough.

But, in the mean time want to try a day as online "Kamla"? Checkout here at oDesk.
Posted by RealTimeBangladesh at 10:38 PM 1 comment: