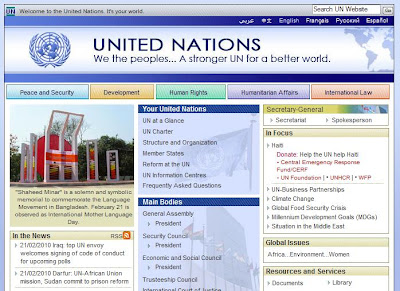 Posted by RealTimeBangladesh at 11:10 PM No comments:

So who is in which side? Even "progressive" blogs fails to call spade a spade. Huffington Post Report on the incident carefully  reports without the T*** word:

"A software engineer (???) furious with the Internal Revenue Service launched a suicide attack on the agency Thursday by crashing his small plane into an office building containing nearly 200 IRS employees, setting off a raging fire that sent workers fleeing for their lives.... At least one person in the building was missing."

Were the target of this attack not civilian? Is the victim different from the innocent victims of 9/11? Does the victim here need a memorial? Did Mr. Stack has a political agenda? Was there a political believe behind?  Here is his last manifesto that he signed off with his name and dated with a finality "(1956-2010) February 18th". A digital epitaph for self. A reader can judge by himself where to draw the line- what is political and what is not. But, here are two lines with near poetic rhyme:

Is it political? Now he writes:


"violence not only is the answer, it is the only answer."

Its amusing to watch that Media reports across  USA have avoided the T word. NBC's Mr. Pete Williams even said that this was not an act of Terrorism.  Why? According to him there are "a couple of reasons to say that . . . One is he's an American citizen.". This mister is a Stanford product!

The Goebblian logic is clear. You can guess the logic! Some live discussion can however can be found in Blogs.  Glenn Greenwald's article articulates the problem this way:


"The term now has virtually nothing to do with the act itself and everything to do with the identity of the actor, especially his or her religious identity."...
...A non-Muslim who flies an airplane into a government building in pursuit of a political agenda is not, or at least is not a Real Terrorist with a capital T -- not the kind who should be tortured and thrown in a cage with no charges and assassinated with no due process. Nor are Christians who stand outside abortion clinics and murder doctors and clinic workers."

Read this whole article. It cannot be explained better. In fact, one should not be surprised if the mainstream media would soon place this inconvenient event under rug!

To get the world rid of terrorism the first step is to accept the term in its genuine meaning- the act or targeting civilian's- and we must call a spade a spade- irrespective of who is doing it- be it a government, group or individual.

Unfortunately, those who refuse to define the term- but use it only the way they want to use it- celebrate when civilian deaths continue as their crusade against undefined terrorism continues. People who does not have say in media may be silent - but they are not fools. This is how this manifesto states:


"The cruel joke is that the really big chunks of shit at the top have known this [Violence is the only answer] all along and have been laughing, at and using this awareness against, fools like me all along."

Whether MSM calls him T*** or not- paragraph by paragraph this manifesto exposes the making of a Flying Human Bomb- made-in-USA with 100% American material.

A perfect person to begin with- perhaps an overly optimistic rational person.Then the growing feeling of desperation- then the feeling how a powerful system is coming crushing.The person would first try various rational things in his means to seek remedy staying within the system. But then the feeling that there is no recourse within. The ultimate hopelessness.Then the growing realization about hypocritical standards. The sense of injustice. Somebody else doing a bigger crime is being rewarded. Then the anger. Finally, the ultimate realization about the destructive power of mortality. Every one has at least one life to spare. By this time even if that means irrational self-destruction - where the first victim is himself and few more innocents who are more likely to be persons like him rather than the perpetrators.
This transformation process can work on any individual - even an perfect American White Christian can turn into a flying human bomb.

So Mr. Stack is not a T***. Keeping aside the T*** debate-- there might be more interesting reading in the manifesto. It reads:


"Why is it that a handful of thugs and plunderers can commit unthinkable atrocities (and in the case of the GM executives, for scores of years) and when it's time for their gravy train to crash under the weight of their gluttony and overwhelming stupidity, the force of the full federal government has no difficulty coming to their aid within days if not hours?"

Is it not the main American Politics of today said in plain words? I move between multiple Worlds. This is an extraordinary time. The general US population is suffering from extraordinary gloom, hopelessness, and negativism. Even people of the Third World have more positive believe about their future.

It is surprising that the blind US media and deaf politicians- left or right is unable to read into this boiling anger. Hypocrisies lie naked when US politicians fail to provide their fellow citizens even a basic health care when they have allowed lavish 'healthfest' for themselves at tax payers expense.

Mainstream Americans are finding it increasingly harder to meet their basic need and seeing nothing but darker days ahead- US lawmakers irrespective of their D or R color are busy ensuring CEO bonus using the tax money of these very middle and lower income population.


"My neighbor was an elderly retired woman (80+ seemed ancient to me at that age) who was the widowed wife of a retired steel worker...All she had was social security to live on.

In retrospect, the situation was laughable because here I was living on peanut butter and bread (or Ritz crackers when I could afford to splurge) for months at a time. When I got to know this poor figure and heard her story I felt worse ... I was genuinely appalled at one point, as we exchanged stories and commiserated with each other over our situations, when she in her grandmotherly fashion tried to convince me that I would be "healthier" eating cat food (like her) rather than trying to get all my substance from peanut butter and bread."

Eventually, this American man turns violent to make a statement - to be heard- completely being oblivious to the fact that victims are none but fellow innocent sufferer like him.

USA is facing obnoxious Islamic terrorism by mishandling world geopolitics since its early days. That is however still an outside nuisance which can be fought in some one else's land at the expense of some elses live. But, a more ominous anger seems to be boiling right here inside USA during this great squeeze of the middle class America.
The leaders of current USA- politicians, media pundits, and business leaders still seems to be dangerously out of touch. Clearly they are too rich. Perhaps they need to genuinely read into the manifesto of this devastated American for once with heart. Before it gets too late this time.

As I look at my American neighborhood-there might be thousands more to go nuts in this environment of desperation and hopelessness. Fortunately for me- they still does not have access to their plane.
Posted by RealTimeBangladesh at 8:19 AM No comments:

See the 'manifesto' of the man who flew the plane into Austin, Texas IRS building wrote

Federal authorities are investigating the following web posting linked to Joseph Stack, the pilot of the single-engine plane that crashed into an Austin, Texas, office building where Internal Revenue Service employees worked.

If you're reading this, you're no doubt asking yourself, "Why did this have to happen?" The simple truth is that it is complicated and has been coming for a long time. The writing process, started many months ago, was intended to be therapy in the face of the looming realization that there isn't enough therapy in the world that can fix what is really broken. Needless to say, this rant could fill volumes with example after example if I would let it. I find the process of writing it frustrating, tedious, and probably pointless… especially given my gross inability to gracefully articulate my thoughts in light of the storm raging in my head. Exactly what is therapeutic about that I'm not sure, but desperate times call for desperate measures.

Continue Reading >>
Posted by RealTimeBangladesh at 7:33 AM No comments:

Want to know how Shaikh Moni is connected to Prince Musa Bin Shamser? How and when the arch rivals Sheikh Selim of AL and Iqbal Hasan Tuku of BNP became Behai's?

Who's ukil bap is Gen. Hossain Muhhamad Ershad? How might be Sheikh Hasina related to Dr. Fakhruddin  and what late former Janata Bank MD Mr. Salehin  has to do with it? What exactly is the relationship between our PM and current President?

In this amusing Probe News article get an update on who is married to whom in Bangladesh in bed and politics. The article untangles the tangled web of family and personal connections between the politicians and businessmen and various influence peddlers in Bangladesh.

If you know more about these relationships feel free to add few more using the comment section.


Posted by RealTimeBangladesh at 10:26 PM No comments:

Independent.uk: A few Inventions by Muslim World
AS thousand's flocked to this January's blockbuster exhibition in UK, take a look at inventions we take it for granted..  from your morning coffee, the concept of multi-course meal with soup, fish or meat followed by fruits and desserts, your camera, fountain pen, almost all surgical instruments, windmill, gardens.. ..Or you can read more about the contribution of world civilizations in science and technology at www.1001inventions.com.

Amused, angry, or anguished by the blatant euro-centrism in the pervasive media and society? Islam-centrism is however, not the answer. Any 'civilization' is a collective story. Even Lau Dobbians are cleaning up after potty the way Chinese have taught them. Read Alams blog on the nature of ethno-centrism (a.k.a ignorance) in todays education system:


"Unbeknownst, my students discover that they wake up in "pajamas", trousers of Indian origin with an Urdu-Persian name. Out of bed, they shower with soap and shampoo, whose origins go back to the Middle East and India. Their toothbrush with bristles was invented in China in the fifteenth century. At some point after waking up, my students use toilet paper and tissue, also Chinese inventions of great antiquity."

Indeed not only the poor Western kids and the Western audience of mainstream media are part of this brainwash- even the kids and public of the 'colored civilizations' suffer from this disease since we too are copying the same text book and news texts without thinking. We must check the education and perception that we are dispensing. Check, check and check..
Posted by RealTimeBangladesh at 9:37 AM No comments: