Mr. Prahlad Jani is living for decades years without taking any food or water. The long-haired and bearded yogi was sealed in a hospital in the city of Ahmedabad in a study initiated by India's Defence Research and Development Organisation (DRDO), the state defence and military research institute. If he is not deriving energy from food he must be deriving it from somewhere else such as sunlight? Now indian military is researching him with hope that one day Indian soldiers can also fight for days without food and drink. Read more of the AFP story here.

Mr. Prahlad Jani  did not eat or drink for decades.


However, poor Mr. Faiz Mohammad from Pakistan was not so lucky. He was arrested at Karachi's Jinnah International Airport last night by startled airport security force with a weired pair of wired shoes with a cell phone power jack and on-off switch! (see picture below).

Mr. Mohammad, a building constructor who was heading for Muscat in Oman, told investigators he bought the shoes from a market in Karachi and had no idea there were circuits hidden inside the soles. 'It is premature to say what was he up to. We are looking into the matter thoroughly,' police official Sohail Faiz said.


Mr. Faiz is in trouble for his shoes below: 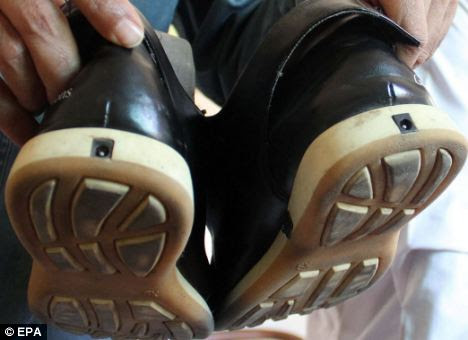 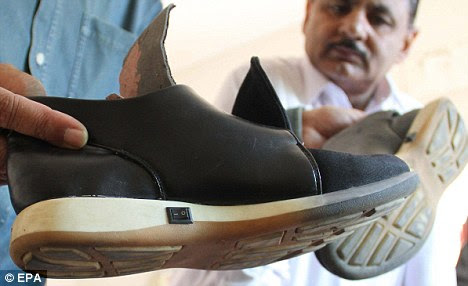 Poor Mr. Faiz perhaps had no idea that what havoc his shoes can bring in post 9/11 world specially with his beard and look! Perhaps some kind of massage shoe? Sure these are cool for long flights.