Last weeks we blogged about apartments- if the recent houses built in this decade of apartment mania can withstand the big jolts? 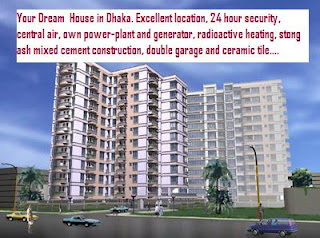 You are feeling lucky? No earthquake in Bangladesh in last few days?  Well if your apartment or house is recently built you may have more reasons to be shaken.

An alternate title for this report might have been Radioactive Apartments of Bangladesh!  Read on..

Not only earthquake disaster- an environmental disaster is also looming in Bangladesh.

You read about dumping of toxic waste into the Bay of Bengal [Greenpeace report] ? You knew how Somali pirates were infuriated that European nations were dumping into their waters [Al-jazeera news] ? Well you may feel lucky again that after all your house is not seafront villa overlooking the Bay-of-Bengal.

But, what if you find out that somebody has dumped their toxic waste right in your house- indeed right in your bedroom, living room,  kitchen, inside the walls, floor and your roof?

Since sometime around 2000 a new material called "Fly Ash" has been added to all major brand cements used in  Bangladesh. It is being imported from the thermal power plants of India mostly from Farakka!


"Fly Ash, now mostly used by most of the cement grinding companies in the country.According to experts, while regular method of producing cement is mixing 95 percent clinker with 5 per cent gypsum, which makes Portland Grey Cement, conventionally used for various types of construction, the cement produced with approximately 70 percent clinker and 30 percent fly ash could be used in any light construction only. But, in Bangladesh, such cement has been largely used in major constructions, including bridges and high-rise buildings, leaving serious risk of massive devastation once earthquake measuring above 8 in Richter scale takes place in the country."


So from where it is coming? Who is bringing it? Farakka seems to have become the source of our peril again! Here is the twist of events. It is an industrial waste- product of coal fired power plants. This is Wikipedia page on it. The web-site of the exporter company Leonoard Exports, based in Kolkata, proudly indicates:


"Leonard Exports is a group headed by Mr P.K.Daloria, former Regional Manager (Sales) of Raymond Cement, having more than 20 years of experience in the cement Industry. Since its inception in  2001, we have been the pioneer in exporting Fly Ash to Bangladesh , Sourcing from Farakka Super Thermal Power Station. The concept of blending fly ash with cement was introduced by us in Bangladesh . We export approximately   20 to 25 thousand tons to Bangladesh per month."


If your apartment building or house is built with Holcim, Cemex, Seven Circle, MI Cement, or Heidelberg brand of cement you might want to check it's exact recipe out as Mr. Daloria lists all of them as his clients.

Fly Ash is also toxic and reportedly being dumped at upper Jomuna riverbed [news]. Of course, people there did not like it.This is what Delhi media IndianExpress reports in July 2009:


"Fly Ash s a toxic material typically containing arsenic, cadmium and lead. Cadmium is carcinogenic. Even one part per million of cadmium in living tissue of plants and animals may cause serious damage. Fly ash also negatively alters the DNA of plants. Plants have been found to undergo anatomical changes when grown on fly ash."


"The Lieutenant-Governor’s Office has directed the Delhi Development Authority (DDA) to stop dumping fly ash on the Yamuna floodplain with immediate effect. Newsline had reported how the DDA was using toxic fly ash to level the Yamuna floodplain at the site of a flyover coming up in front of the Commonwealth Games Village."


Now there is new November 2009 report that Babies are being born without limbs and organs in Dominican cities. Here is the picture of a Fly Ash Baby and this ash was dumped by US  Coal company.

Maximiliano Calcano is 2 and was born with no arms. Mother cites that this is the result of Fly Ash dumped by a Virginia-based AES Corp.

Bangladesh is now also poised to build large coal fired power plants. So next time our own Bangladeshi power manufacturers will have plenty of fly-ash to peddle. Expect them to look forward to your neighborhood.

Does My Apartment also comes with Radioactivity?


If your dwelling has been built with Fly Ash- you also might want to keep your house ventilated, windows open- indeed wide open. This is what  a fresh 2008 study [Sundar, Danalakshmi, and Santhanam, 2008] conducted by the scientists of Radiological Safety Division, Indira Gandhi Centre for Atomic Research is reporting:


"Since fly ash contains measurable quantity of radioactive species viz., Uranium, Thorium and Potassium though may be negligible it is of interest to study their radiological impact to the society. As part of an extensive study to meet this objective, radon measurements were carried out in the buildings/houses constructed with fly ash bricks and non-fly ash bricks in the residential areas of 10 major thermal power stations situated in India spanning about 1000 km from each other. The results of the study indicate that radon concentrations in both the types of buildings are well within the stipulated values and the radon levels do not differ much in view of good ventilation provided in most of the houses."


Here is a 2009 report on the recent investigations unfurling in US:


"Tennessee residents near the Kingston plant [with fly ash dump] are faced with a future laden with   potential cancers, birth defects and neurological anomalies that doctors will diagnose and bureaucrats dismiss. Fish are also turning up dead in record numbers  , though the effect on other populations, like birds, will probably wait until summer to reveal itself."


You may want to read the full report on this developing international environmental disaster/scandal. It involves powerful energy lobby, complacent government agencies and your sleep (if you are a owner of a dream apartment).

Posted by RealTimeBangladesh at 1:12 AM