Why The Forbidden Love Story Meherjaan Should Be Banned! 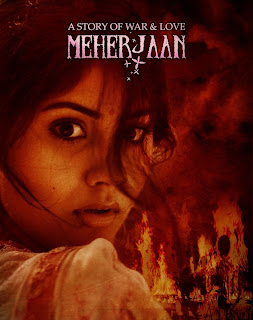 We blogged some time ago about Nirjhor’s Namuna held at esteemed Bangladesh Film Censor Board (BFCB).  Now we have another runaway film- Rubaiyat Hossain’s “Meherjaan. The problem is BFCB failed to ban it, despite its anti-national narrative! Our Bengali tribe is thankful to film’s distributor Mr. Habibur Rahman Khan (Prothom Alo, January, 29, 2011) - who despite his financial sacrifice finally could stop this contamination of our sacred history by romantic imagination (or actually it is not- it based on a Boston ghost story... read on)!

The film "Meherjaan" imagines a politically forbidden love affair between a Pakistani soldier and a sexy Bangladeshi girl (Read the synopsis here) in 1971 Liberation War- and surely bruises our most sensitive nerves!
It is absurdly Utopian. But, it has been made so to deliberately provoke alternate narratives of Liberation War. Ms. Rubaiyat writes:

“History is not a coherent narrative. …A war is always made into a glorious narrative with certain male hero and villains. The purpose of Meherjaan is to break the glorious narrative of national history to open up a modest avenue to explore… multiple narratives of Muktijuddho…

History [of 1971] has to be told, not only from the vantage point of the armed forces, the politicians, the freedom fighters, the men, rather, history has to be told from the voices of every other person that was left out, the old woman, the man who didn’t fight, and maybe a young girl who was coming of age and falling in love while the entire country plunged into hatred, killing, separatist emotions and nationalist turmoil.”

How dare Rubaiyat nakedly points it out that contemporary Bengali history has been stated from the perspective of nationalism not only since 1971- but perhaps since the British India.
The point she makes is clear- DeshPrem is not reflected in how well a narrative can portray ‘us’ as morally superior and ‘them’ as the complete evil- but how well it could objectively provide penetrating insight into the events those played critical role in the history of our nation.
The made up story of ‘Meherjaan’ quickly reminds me of its dual- the real story of ‘Champa’ brought to attention by Nayanika Mookherjee. In NM’s words:

I came to know about Champa from a newspaper article in Bhorer Kagoj (13/5/98) with the headline ‘Birangona Champa in the Mental Hospital’ with a picture of a woman who seemed to be in her mid 40s.”

NM then proceeded to research the story, found out the real Champa, met her in Pabna, spoke to her, and eventually helped to actuate the narrative. It reveals how NM obviously founds that there is “disjunctions between Champa’s narrative as accounted to me and the narrativisation in the article in the press per report”. One might find NM’s findings a rebuke to the journalists. In reality- both the journalists and the researcher played collective role in increasing the depth of the real story of a human Champa. This fascinating story of the story of Champa is worth reading: Ethical Issues Concerning Representation of Narratives of Sexual Violence of 1971.
A necessary step in this process of attaining depth of understanding is the acceptance of multiple narratives. Not to mixup. Champa is real while Meherjaan is imaginary. But both are screaming intellectual statement to begin that meticulous search for factual objectivity.
There is a short term risk- some existing narratives will be shaken, it will appear as confusing in myopic minds and old egos will be bruised. But, in the long run- it will make the foundation of the nation much more genuine rather than degenerating it to mythical. But of course, for last 40 years we have followed Omar Khayyam’s – “Laav ki shune durer baddo majhkhane je bejai faak?” than Rubaiyat’s.
However, it seems that BFSB had missed yet a bigger rebel in Rubaiyat. This story is imaginary. We know it could not happen and did not happen. It is not part of past- but can it be part of future? Indeed, the author fervently wishes it to really happen! This is what RH is saying:

“Meherjaan” also attempts to reach out across the borders imposed in 1947, and forge a creative link among Indians, Pakistanis and Bangladeshis. Our hope is to open up a modest avenue to bridge the ruptures that nationalism’s exclusionary nature has inflicted upon us in South Asia”.

Hmm! Don’t my paranoiac brain hears the bell of Pak+Bangla unification or India’s Bangladesh annexation ??
Where from she is drawing such audacity of love? Mind that Rubaiyat represents a new generation at the dawn of globalization. Rubaiyat’s generation sees the banality of excessive nationalism in post independent societies. The rules of the old world – with its racism, regionalism, religion-ism, and even nationalism, state-ism, eventually divide people, and do not help anymore her generation. These should go the way racism and caste system has gone. In her incredibly shrinking world, so many people need to live so close just with two-and-a-half degree of separation in a networked world. So she is seeing a desperate need to soak the world with feminine love to make it livable again- especially drenching places where it has been forbidden:

While the world plunges into unlimited war and terror, we believe there is necessity to look outside the masculine ideology of nation-state and violence... With this saga of love and romance we intend to instigate a process of healing the unattended wounds of 1971 by bringing out the otherwise inaudible voices of history...”.

I think by her own admission- she can be tried as anti-state, anti-nationalist, anti-awami, pro-Pakistani, pro-Indian, anti-leftist- even anti-Davos anarchist! Thanks to Mr. Habibur Rahman Khan for correcting the mistake of BFCB and saving the old world of ours!
*******
Ms. Rubaiyat has completed her BA from Smith College of Massachusetts- one of the most haunted Women’s liberal arts college in US- which is famous for numerous ghost stories of fateful lovers surrounding its centurion campus buildings (Famous alumni include Nancy Regan and Barbara Bush).
Well the story of Meherjaan is actually not fully made up! One of those famous Smith campus ghost stories is about the fateful love between British General Burgoyne and his secret lover Mr. Hunt's eldest daughter Lucy. Two would rendezvous in and around the secret stairs of Session House building. This was indeed built originally by the Lucy’s grandfather, Captain J. Hunt in 1751. The affair took place at Boston at the backdrop of American War of Independence in 1770-1785’s. This is the brief period when both the current territories of Bangladesh and US were under the same government! But the British General miserably lost the war and had to promise never to return in US soil to avoid a formal surrender. He returned to England broken heart. Lucy, in the newly independent US, was left tormented with her lost lover. The two were driven apart by the winds of war. Until today there are citing of the ghosts’ of the lovers in campus that stirs the young feminine minds trolling the campus.

Ms. Rubaiyat also has an MA from South Asian Studies program at UPENN which finally washed her brain in the idea of South Asian emancipation! She also holds a diploma from New York Film Academy. Here is her short biography at the Internet Movie Database. In 2006/7 she spent time as a lecturer in BRAC University. She also happens to be the daughter of Bangladesh’s current communication minister Syed Abul Hossain. May be that’s why she is not arrested yet for polluting the narrative of Bangladesh’s War of Independence with a ghost story from American War of Independence!