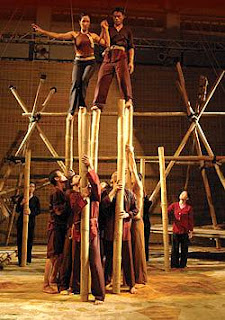 The recent dramatized ouster of Dr. Yunus from Grameen Bank- has stirred quite a bit of media storm about the Nobel Lauriat founder and the Bank. However, this storm might be one created only by a handful of people. Two interesting articles will provide the clue for a possible coordinated assult on GB.


Our last blog on the topic- Grameen Circus (March 2011) discussed the data driven research available on the Bank. Now this blog- equally interesting- unearths the other side- the twisted misinformation spreaded on the topic.


Right after the Heinemann visit to Jobra, apparently two articles have claimed visits to Jobra. These areWeeklyBlitz article by ZA and bdnews24.com article by MC.


Many worldwide are anxious about the micro credit issue- and perhaps many readers have already encountered the reports on the recent condition on the last days of Ms. Sufia- the lady whose borrowing 30 something years back begun the very concept of microcredit and her village ‘Jobra’. She was made a kind of poster lady for Grameen concept.


Now before reading the rest of this article readers are encouraged to read the above two articles first.

“Sufia Begum died in 1998 due to extreme poverty and local people had to collect donations for her funeral and burial. One of her grand-daughters died few years back due to poverty”.

Many in her village eventually received microcredit loan. Alas, what happed to them! The report finds:


“This [village] was the beginning of Grameen Bank concept. But, most of the borrowers [in this village], who took money from Dr. Yunus, gradually turned poor to poorest as they were compelled to pay regular interests. In Jobra village alone, a large number of villagers have already been turned into pauper by Dr. Yunus and his Grameen Bank”.


“For months, extensive investigation into the so-called success models of Grameen Bank and Dr. Yunus were initiated by Bangladesh's most influential newspaper Weekly Blitz. On the basis of such investigation, series of stories of virtual fraud by this high profile man was unearthed.”

Feels absolutely heart breaking? However, you may want to read another report done by another reporter MC in bdnews24.com on Dec 2, 2010.

Both the reports are apparently ‘original’ created from “first hand research” but almost identical in-tone and their structure!


Cites and quotes are attributed to similar set of characters, repeats the same information, but none cites the other. So who is plagiarizing whom? Well it is possible that they have relied on one another?


While the attacks and spins are identical, but funny these differ in basic facts- ideally which should have been the same.

ZA writes: “But on investigation, it was found that, Sufia Begum died in 1998”.

Question: Is she Sufia Begum or Sufia Khatun? Which year did she actually die?


MC Writes: “Thirty-five years later, little has changed for Sufia Khatun's family. The first borrower of Grameen Bank has died poor; her two daughters, Halima Khatun and Nurunnahar Begum — one a house wife and the other mentally disabled; live a marginalised life.”

ZA writes: “Sufia Begum's daughter Halima [48] and Noor Nahar [45] still lives on begging. Seeing this correspondent both the sisters said that they were left absolutely pauper and have to beg for survival.”

Question: So what is the actual state of the daughters- begger house wife ?

“Dr. Muhammed Yunus gave TK. 20 [US$ 0.30] to Sufia Begum Years back as loan with the condition of returning in time with interest. Sufia Begum returned that money and got second loan of Tk. 500 from Yunus.”

Question: How much she actually borrowed?


Both the writers are from Chittagong. Interested readers may perform additional search in face book etc. are get some interesting additional info about both MC and ZA.


Of course this discrepancies does not negate that poor Ms. Sufia could not defeat poverty with the micro credit loan.


But, these discrepancies really raise question about journalistic quality of the article in circulation- about such an important issue. Which one is right about basic facts? One has to be really careful before believing such amusing brand of 'extensive investigation' !!


It seems not only the reporters, but their editors (at least one of them in this case) for sure is not doing the basic editors job – i.e. fact checking!


Indeed, both Weekly Blitz and bdnews24.com have published similar "extensive researched" articles on the topic ( ref ).

Now here is further shadow propaganda. You will find the Weekly Blitz's article almost a copy printed as  a completely different title- Tale of Nobel laureate's continuous fraud in moderngana.com and by a different author SUSC ! SUSC happen to be the editor of the Blitz too. But, then is the real author of the article?

Now the fun is here. In this age of Internet, a brief search in Google, will return another blog by a lady named Jessi of World Teach who happens to have visited the same Jobra Village a month earlier in October 2010! Not connected like the other two- and she portrays quite a different picture of Jobra.


She visited Bangladesh to teach in Asian University of Women from WorldTeach program. Readers will enjoy checking all these three articles. Jessi’s independent journal has more details about what she saw – including pictures and narratives rather than attacking or supporting banters on Grameen Bank.


If you want to read the ones critical on GB, a more credible report is available in Asia Times Online and form your own opinion.
Posted by RealTimeBangladesh at 7:37 AM