Government land-grab by political and business bigwigs and administrative inactivity is a serious problem in Bangladesh. It is growing and land prices are skyrocketing.


The Rangs Building- was owned by a powerful business group of Bangladesh. The group first made its fortune being one of the first distributor of SONY electronics goods in Bangladesh. The building stood as the 'national monument' of land pirates- as a symbol of corruption and abuse. In one of the few people's success stories it was demolished in 2008. This national 'accolade' now bestows on another building not too far from that Rang's Monument- featured below!


"The government is going to inflict yet another taint on Louis I Kahn's Sher-e-Bangla Nagar capital complex by leasing out land for a training academy and a UN office.

Here are some recent news which should expose to the complexity of the problem:

Public Grabing Kaptai Lake | RAJUK Grabing the Dhaka Rivers | Are You The Lucky One to Get a Plot in Purbachal? | United Nation to Grab 2-Acre from Shangshad Bhaban Lawn 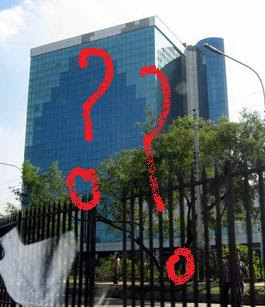 MOYEEN is Gone. Bangladesh Garment Manufacturers and Exporters Association (BGMEA) to Hold on to "Illegal" Skyscraper in the Middle of Precious Wetland at the Heart of Dhaka with Blessings from Govt.

After the negative news of child labor, poor treatment of workers, the garments industry is earning another black spot. The misguided leadership of BGMEA is putting its members into trouble- opening its members to more national and international criticism-  making them appearing as rouge cohorts in the leadership's  dishonest mindset- apparently for no benefit to its members.

In fact, the way things are turning - it might cost way more.

The particular building -blatantly stands in the middle of Kawran Bazar's wet land. Such anti-environment activity  coupled with their other issues- can spar international boycott.

It is not clear if BGMEA is aware of its precariousness. The labor unrest situation in Bangladesh Garment's Factory is one of the most explosive in the world. Extreme low wages- high awareness about the exploitation among the workers- and weakness of the management is  spelling  an accident to happen.

You can write to BGMEA at www.bgmea.com.bd.

Govt Recovers 26 Bigha Land Grabbed
The grabber seems to be a member of the ruling party. To set example it should expel such members from the party of Bangabondhu.
Posted by RealTimeBangladesh at 2:10 PM